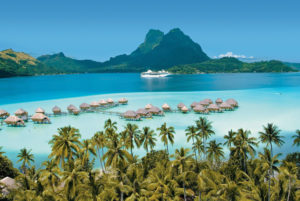 Q – We have had two excellent experiences on both a seven-night round-trip Papeete cruise on the Paul Gauguin as well as a magnificent sailing of almost two weeks that included both Fiji and the Cook Islands.

We loved this type of cruising – totally laid back with no formal nights, and sand in our sandals during the day on pristine beaches or snorkeling in beautiful, see-through water. And the inclusive price was not bad – they even flew us free to Tahiti from LA. But – what next? How do we find something similar with the same level of food and service on new itineraries in this part of the world? Bottom line – we want something to look forward to and the ritzy sleek ships at the top of the ratings don’t float our boat.

A – We may have some good news for you requiring a bit of patience. The Paul Gauguin, a one-ship wonder of a company, was recently sold to the French-owned luxury yacht operator “Ponant”. Very shortly after the ink had dried, Ponant announced that it is building two new 230-Guest luxury expedition ships for the Paul Gauguin brand. The ships are being built by the highly-regarded Italian shipbuilder, Fincantieri.

This is estimated to be a $330 Million deal and we hear there is an option for a third vessel. Delivery of the first of the new twins is anticipated in late 2022. You may be able to book your passage on one of these new beauties as early as January 2021.

The ships will operate on partial battery power allowing them to sail in environmentally sensitive areas without harmful emissions. This type of ship can open up some marvelous new cruising grounds in the South Pacific.

Keep those Speedos dry. Your time is coming.